Archaeologists have found three Inca child mummies dating back to 500yrs on the top of the 22,000ft summit of the Mount Llullaillco volcano in Argentina. One of the mummies found is that of a thirteen year old girl, now dubbed as the ‘Llullaillaco Maiden’, the other two mummies are that of a boy and a girl aged around four years old. The mummy of Llullaillaco Maiden is remarkably preserved whereas the remains of the boy and the girl were struck by lightning and so are charred.

The thirteen year old Llullaillco Maiden mummy which was discovered on top of a 22,000ft mountain in Argentina. Photo © Johan Reinhard.

The mummies were found separately entombed within a shrine, and were originally discovered in 1993 by Dr Andrew Wilson and his team of archaeologists from Bradford University. But it’s the recent findings that have spurred them into the news. The team of archaeologists analysed strands of the three mummies’ hair and discovered that in their later years they were drugged with beer and cocaine. As the Llullaillco Maiden’s hair was so long, with a centimetre of hair growth estimated per month, it allowed for an analysis that compared the alcohol and cocaine consumption during her last 21 months of life. An axial radiograph also showed that a coca leaf was held between the Llullaillco Maiden’s teeth. It is thought that she was fed the coca to subdue her during the Inca rituals. 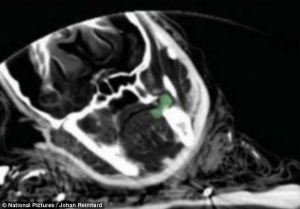 Axial radiograph of the thirteen year old mummie, shown highlighted in green is the coca leaf.

It is thought that according to Inca beliefs, the children served as guardians over their villages from the heights of the mountains. Capacocha was a ritual in which local lords were required to select unblemished children (representing the ideal human perfection), who were then married and returned to their original communities where they were honoured before being sacrificed to the mountain gods. The ritual of capacocha took place upon the death of an Inca king.