This is the 3rd blog post in this Quick Tips series on estimating the biological sex of human skeletal remains. If you haven’t read the first post on the basics of sexing skeletal remains, click here to start at the beginning or if you skipped the 2nd post focusing on the skull method if sex estimation, click here.

When it comes to sexing skeletal remains by the pelvic elements there are a few trends, as stated in the first blog post in this series, the female pelvic bones, specifically the sacra and ossa coxa are smaller and less robust than their male counterparts.

Figure 1: Side by side size comparison of a male (left) and female (right) pelvis.

Although the female pelvic components are smaller in general, many aspects of the female pelvis are wider than males. The pelvic inlets on a female are relatively wider than those of males, as well as the greater sciatic notches – which is thought to aid childbirth. 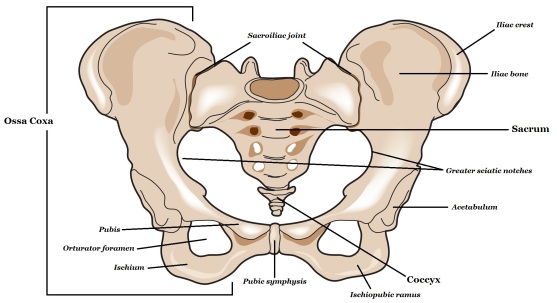 There are numerous features of the pelvic bones that are examined to identify the biological sex of an individual, alongside the trends stated about. These features are as follows;

The first three features listed above, are known as the Phenice method – which was proposed by T. W. Phenice in 1969. His paper, “A Newly Developed Visual Method of Sexing the Os Pubis”, contributed greatly to the method of visual determination of sex, as beforehand the methods were subjective and based largely on the osteologist’s experience. The Phenice method should only be used for fully adult skeletal remains, where it is 96 to 100% accurate.

The ventral arc is a slightly raised ridge of bone that sweeps inferiorly and laterally across the central surface of the pubis. It joins with the medial border of the ischiopubic ramus. The ventral arc is only present in females, although males may have raised ridges in this area, but these do not take the wide, evenly arching appearance of the ventral arc. 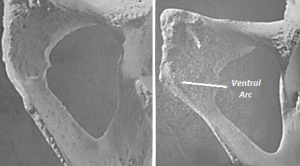 Figure 3: The ventral arc is characterised by a slightly raised ridge of bone. Males (left) do not exhibit the ventral arc, where as females (right) do.

Figure 4: Females (right) display a subpubic concavity here where the edge of the ramus is concaved, whereas males (left) tend to have straight edges or very slightly concaved.

To observe the medial aspect of the ischiopubic ramus, you should turn the pubis 90° so that the symphyseal surface is directly facing you. View the part of the ramus that is directly inferior to the pubis symphysis. In females, the ramus has a sharp, narrow edge, whereas in males it is flat and blunt. 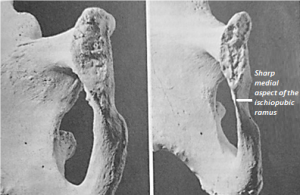 Figure 5: In females (right), the medial aspect of the ischiopubic ramus has a sharp, narrow edge, whereas in males (left) it is flat and blunt.

To obtain the best results whist examining the os coxae, it should be held in the same orientation as the pictured above. This allows you to match the angle of the greater sciatic to the closest expression that represents it. It should be noted that this method is usually used as a secondary indicator.

This is the third post of the Quick Tips series on sex determination of skeletal remains. The next post in this series will focus on the use of DNA to determine biological sex. To read more Quick Tips in the meantime, click here!

This is the 2nd blog post in this Quick Tips series on estimating the biological sex of human skeletal remains. If you haven’t read the first post on the basics of sexing skeletal remains, click here to start at the beginning.

One of the most widely used methods of sexing skeletal remains is by examining the skull. The skull has five different features that are observed and scored.  The five features are the:

To observe the nuchal crest, one should view the skull from its lateral profile and feel for the smoothness (1-minimal expression) or ruggedness (5-maximal expression) of the occipital surface, and compare it with the scoring system of that feature (Figure 1).

Figure 1: The scoring system for expression levels in the nuchal crest.

To observe the mastoid process, one should view the skull from its lateral profile and compare its size and volume, not its length, with other features of the skull such as the zygomatic process of the temporal lobe and external auditory meatus. Visually compare its size with the scoring system of that feature (Figure 2). If the mastoid process only descend or projects only a small distance then it should be scored a 1 (minimal expression), where as if it is several times the width and length of the external auditory meatus, then it should be scored as a 5 (maximal expression).

Figure 2: The scoring system for the expression levels of the mastoid process.

To observe the supraorbital margin, one should view the skull at it’s lateral profile and place their finger against the margin of the orbit and hold the edge to determine it’s thickness. If the edge feels ‘extremely sharp’ then it would score a 1, minimal expression, if it felt rounded and thick as a pencil it would score a 5, maximal expression (Figure 3).

Figure 3: The scoring system for the expression levels of the supraorbital margin.

Figure 4: The scoring system for the expression levels of the supraorbital ridge.

Figure 5: The scoring system for the expression levels of the mental eminence.

This is the second post of the Quick Tips series on sex determination of skeletal remains. The next post in this series will focus on the use of the pelvis and parturition scars to determine biological sex. To read more Quick Tips in the meantime, click here!

Therefore, it is important to remember that the word ‘gender’ refers an aspect of a person’s social identity, whereas ‘sex’ refers to the person’s biological identity.

Sexual dimorphism as seen in the human skeleton is determined by the hormones that are produced by the body. There are numerous markers on a human skeleton which can provide archaeologists and anthropologists with an estimate sex of the deceased. The areas of the skeletal remains that are studied are the:

The two most commonly used skeletal markers that are observed by osteologists are the skull and pelvic bone, as these show the most extreme differences.

It is generally noted that female skeleton elements are characterized by being smaller in size and lighter in construction, whereas males have larger, robust elements. Due to normal individual variation, there will always be smaller, dainty males and larger, robust females. Therefore, it is always important to observe a variety of skeletal markers to come to an accurate determination.

It should be noted that it is a lot harder to reliably deduce a juvenile/sub-adult’s sex, as many of the differences in skeletal markers only become visible after maturation, when the skeletal changes occur due to puberty. Therefore, use of DNA has been widely used to sex sub-adult skeletal remains as DNA analysis can now detect and identify X and Y chromosome-specific sequences.

This is the first of a Quick Tips series on sex determination of skeletal remains. The next post in this series will focus on the use of the skull to determine biological sex. To read more Quick Tips in the mean time, click here!