In 1988, thirty-nine skulls were unearthed below the Guildhall in London. Their discovery left many unanswered questions, but after being recently re-examined – it is now believed that these skulls are the decapitated heads of gladiators. 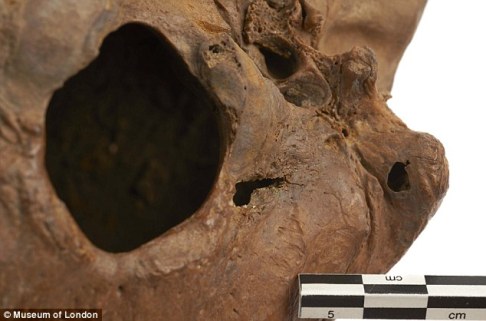 This Roman era skull, believed to belong to a gladiator, shows evidence of sharp force trauma.

Some of the skulls showed signs of ante and peri-mortem injuries, which Rebecca Redfern from the Museum of London, have interpreted as being the result of “sacrificial headhunting, or the remains of gladiators”.

One of the skulls showed evidence that a part of the jawbone had been cut away, which depicts that they were the victims of violence. Others showed multiple lethal blows to the head, as well as healed fractures. These are the first physical pieces of evidence that support that there were gladiators in London, even though it is widely known that this site once held an amphitheatre.

This mandible found at the Roman era site, shows evidence of sharp force trauma – leading experts to believe that these are the outcomes from being a gladiator in Roman London.

Another haul of Roman era skulls have been recently found close to this site. In August of 2013, a team of archaeologists unearthed two-dozen Roman-era skulls, which occurred whilst expanding the underground tunnels beneath Liverpool Street.

The skulls were found within the ancient river sediment deposits, which once belonged to the now extinct Walbrook River. It is thought that the skulls, along with pottery shards, were deposited onto a river bend after being washed away from a nearby burial ground. 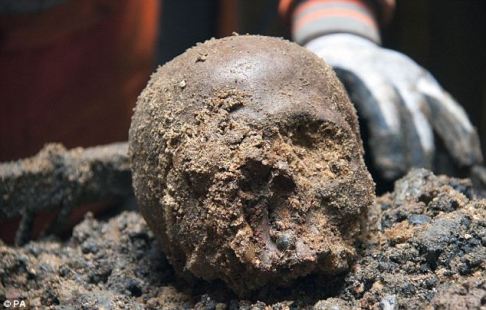 One of the two-dozen Roman era skulls found beneath London’s Liverpool Street Station.

These two-dozen Roman skulls have been loosely speculated to have belonged to victims of Queen Boudicca’s army, during her opposition to the Roman presence in Britain, dating around 61 A.D.