A ‘petrified’ 4,000-year-old brain has been discovered in the Bronze Age settlement of Seyitömer Höyük, Turkey. The brain was excavated inside a skull that was uncovered in an ancient burial ground.  But how did the brain become ‘petrified’ and well-preserved? 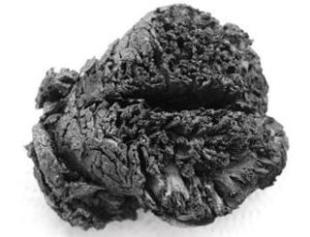 The ‘petrified’ brain found within a skull at the Bronze Age settlement of Seyitömer Höyük, Turkey. © Halic University Istanbul.

Meriç Altinoz, from the Haliç University in Istanbul, has theorised that due to how tectonically active the site is, an earthquake devastated the Bronze Age site. This earthquake would have flattened the settlement, burying everyone and starting a fire. The ancient burial ground shows evidence of the theorised fire due to the presence of charred skeletal remains and burnt wooden artefacts. This fire played a vital key in the preservation of the brain.  Due to the fire consuming a lot of the trapped oxygen within the rubble, the brain would have boiled in its own fluid. This boiling would have burned off the brain’s moisture preventing normal tissue decomposition.

But there is thought to be another factor to how it became so well preserved. The tissue of the brain was found to be full of magnesium, potassium and aluminium. These elements, when mixed with the fatty acids that are present in human tissue, make up adipocere, which effectively preserved the shape of the brain tissue.

This recent discovery of the oldest well-preserved brain tissue has opened up many new areas of study. Frank Rühli, of the Univerisity of Zurich in Switzerland, has noted that ‘the level of preservation in combination with the age is remarkable’ and in such cases could help understand ‘the history of neurological disorders’.