A team of archaeologists, led by Jacek Kabaciński from the Polish Academy of Sciences, have discovered the burials of sixty adults in a cemetery in Gebel Ramlah, Egypt. 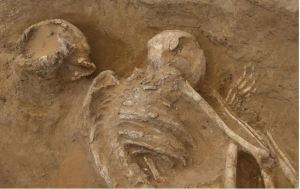 The unusual thing about these burials is the discovery of a grave that contained the skeletal remains of two individuals, one of which has deliberate cuts on their femur. These cut marks have not been seen in other Neolithic burials that have been unearthed in North Africa. But this particular grave wasn’t the only odd one they found. Kabaciński’s team found another two unusual graves one which was found to be lined with stone slabs, but it’s the third burial they discovered which is the oddest.

In the third grave, the skeletal remains of a man were found to be covered in pottery fragments, stones and lumps of red dye. Near his head a fragment of a Dorcas gazelle skull was found, which may have been used as a ceremonial headdress. The skeletal remains also showed signs of abnormal bone adhesions and fractures, leading Kabaciński to believe this man may have performed hunting rites.