This Quick Tips post is the third in the series on age estimation of human skeletal remains, if you haven’t read the first post click here to start at the beginning. The first post provides an overview of the different techniques utilised by archaeologists/anthropologists, which will each be covered in more detail in their own blog post, and the categories that human skeletal remains are placed under according to their chronological age. The second post examines the epiphyseal closure method, which you can find here.

The practice of using dentition to chronologically age human skeletal remains is split into two halves, depending on the whether the skeleton is that of a subadult or adult. This blog post is going to discuss using dentition to age subadults.

Due to the abundance of teeth found in many archaeological, forensic, paleontological, and anthropological contexts and because of the regular tooth formation and eruption times, dental development is the most widely used technique for aging subadult remains. As stated in my previous blog post, several elements of the human skeleton begin the stages of epiphyseal fusion alongside the conclusion of tooth eruption; these two techniques (dentition and epiphyseal closure) are often used complementary to each other to help age sub-adults. When it comes to subadult tooth emergence there are four stages:

Stage 1 is where most of the deciduous teeth, commonly referred to as ‘milk teeth’, emerge during the second year of life.

Stage 2, during this stage the two permanent incisors and the first permanent molar emerge, this stage typically occurs between the age of six and eight years.

Stage 3, occurs between the age of ten and twelve and it involves the emergence of the permanent canines, premolars, and second molars.

Stage 4, or the final stage involves the third molar emerging around the age of eighteen years.

When looking at dentition you must look at all aspects of emergence and not just at the fully erupted tooth, which includes the completeness of all roots and crowns (formation) and the position of each tooth relative to the alveolar margin (eruption). Ubelaker (1989) conducted a study on non-Native Americans and created a graphic summary of dental development and the correlating ages it occurs, see figure 1. 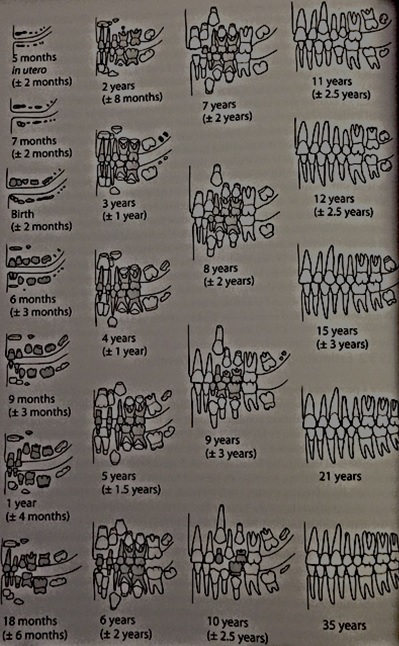 It must be noted that the ages these stages occur at differ per individual so only act as a reference. Gustafson and Koch (1974) created a graph to illustrate the variation that could occur with dental development, see figure 2.

This is the third of a Quick Tips series on ageing skeletal remains, the next in this series will focus on the use of dentition to age adults and the use of cranial suture closure. To read more Quick Tips in the meantime, click here!

To learn about basic fracture types and their characteristics/origins in their own Quick Tips series, click here!

Estimation of age-at-death involves observing morphological features in the skeletal remains, comparing the information with changes recorded for recent populations of known age, and then estimating any sources of variability likely to exist between the prehistoric and the recent population furnishing the documented data. This third step is seldom recognized or discussed in osteological studies, but it represents a significant element. – Ubelaker, D. 1989.

There are numerous markers on a human skeleton which can provide archaeologists and anthropologists with an estimate age of the deceased. The areas of the skeletal remains that are studied are:

We can age skeletal remains to a rough estimate, as over a lifetime a human skeleton undergoes sequential chronological changes. Teeth appear and bone epiphyseal form and fuse during childhood and adolescence, with some bone fusing, metamorphose and degeneration carrying on after the age of twenty. Buikstra and Ubelaker, 1994, developed seven age categories that human osteological remains are separated into. The seven age classes are; fetus (before birth), infant (0-3 years), child (3-12 years), adolescent (12-20 years), young adult (20-35 years), middle adult (35-50 years), and old adult (50+ years).

When it comes to ageing skeletal remains, there are numerous problems. This is because individuals of the same chronological age can show difference degrees of development. Therefore, this causes archaeologists and anthropologists to obtain an accurate age estimate, which may not be precise.

It should be noted that it is a lot easier to deduce a juvenile/sub-adult’s age, as the ends of the limb bones form and fuse at known ages and the ages of which tooth formation and eruption occur are very well documented, although somewhat variable. After maturity there is little continuing skeletal change to observe, this causes adult ageing to become more difficult.

This is the first of a Quick Tips series on ageing skeletal remains, the next in this series will focus on the epiphyseal closure method of ageing sub-adults. To read more Quick Tips in the mean time, click here!